"A man with a decision to make meets a mysterious woman at a bar on the eve of a snowstorm." 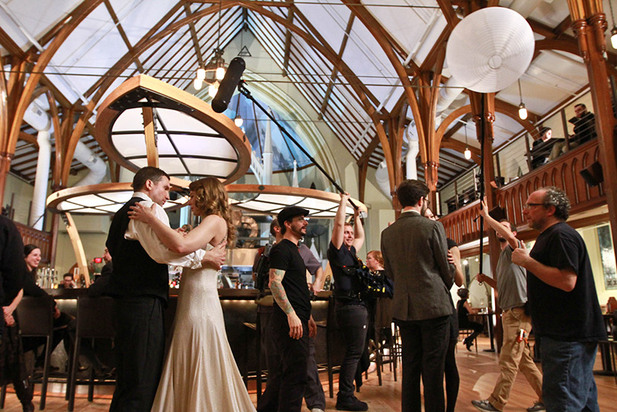 Simpatica is a short film that Dean Merrill asked me to write. He was inspired by Grace, a restaurant and bar set inside an old Church in Portland, Maine.  His only requirements were that it be elegant and required a scene outside in the snow. I hadn't written a romantic script before, so I thought about the kind of romances I enjoy; something unexpected and a little bizarre.  I watched some of my favorite romantic scenes (Janet Leigh picking up Frank Sinatra in the original The Manchurian Candidate--totally weird and delicious) and tried to evoke a sense of mystery and a little film noir. I love 1940s films with snappy dialogue and attitude from the women and although the film isn't set in the 1940s, we tried to use that classic spirit. It was also my first script with a bit of a twist ending.


Gary Robinov came on as co-director and I was Assistant Director for the production. We lucked out with our leads Dana Packard and Jennifer Nichole Porter and the weather, which gave us a fresh dusting of snow the day of our night scene--Hollywood couldn't have created a prettier set!

Simpatica won the Local Love Muscle Film Fest! A big thanks to the entire crew who worked so hard to make my story and Dean and Gary's vision come to light. Check out the film in its entirety below.

Simpatica from Dean Merrill on Vimeo.

Read more about the entire production and process on Dean's website.